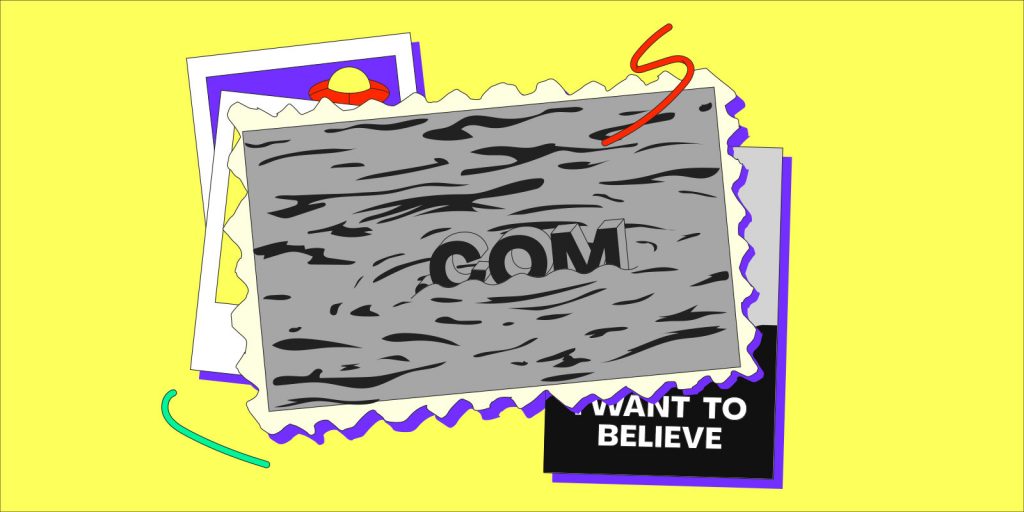 When the internet got big and everyone out there was getting a domain name for their personal or business homepage, there were only a handful of options for TLDs (top-level domains, sometimes called “extensions”)—.com, .org, and .net were the only ones that were really available to the general public. TLDs like .edu and .mil existed back then but they were restricted. And while there were country code TLDs like .fr, if you weren’t in that country, there was little interest.

Which is why .com became synonymous with “domain name.” Like Google for searching, and Amazon for online shopping, .com had the advantage of being the first there and by far the most successful.

While part of how these other two examples became synonymous with the service they offer may lie in the fact that they each have natural monopolies in those areas, .com was the king of the … err … dot-com era because of a very specific choice to limit the number of TLDs.

As more companies got online, they advertised their presence on the web to consumers by advertising their domain names. Saying ‘dot-com’ quickly became synonymous with “being on the web.”

ICANN—the Internet Corporation for Assigned Names and Numbers if you need to know, but they’re the organization in charge of figuring out how to delegate domain names—opened up a handful of new TLDs: .aero, .biz, .coop, .info, .museum, .name, and .pro.

These were the first “new gTLDs” (generic top-level domains). Over the next few years, ICANN would add eight more.

The floodgates really opened up in 2012, though, when ICANN started accepting applications for new gTLDs. They received thousands of applications and in the end, and as of writing, they’ve approved and delegated more than 1200.

And as usually happens, singular experiences can get blown into generalizations and become fixed attitudes. By the time it comes down to you picking a domain name, though, you might hear conflicting information and not really know how to make heads or tails of it.

That’s okay. We’re here to talk about what you might have heard about the new generic TLDs and the truth behind it.

The fear that people have about being an early adopter of something is real. If you get too far out ahead of the rest of the pack, you might find yourself on shifting terrain. Worst case scenario, you don’t want the ground to fall out from under you.

There are actually a couple of reasons why new TLDs aren’t as risky as any new, unproven commodity.

The good news is that before ICANN introduced a single new TLD, they thought of this concern. And they made a plan.

First, ICANN didn’t just give away the right to be a registry for nothing. Applicant registries had to pay a fee of $180,000. Companies have attracted far more than that amount of investment and still gone under, but this fee does ensure that those applying do have access to some funds.

But more importantly, $60,000 of that went towards covering the costs of disputes on the one hand and towards operating costs in case the business goes under. Sort of a “safety deposit” for registries.

Second, by the time these new TLDs were rolling out, some registries had been around for awhile and were already pretty stable institutions. Nominet, for example, which is the registry that manages .uk (and all the related domains like .co.uk) has been around since 1996 with roots back to 1985.

Nominet is one of three “EBEROs” or “Emergency Back End Registry Operators,” who are a failsafe network in case any registry is unable to provide core registry functions for whatever reason, including going out of business.

The bottomline is, while it’s totally possible for a registry to go out of business, they’ve already paid ICANN to help cover the costs, and there’s a plan in place to make sure nothing catastrophic happens if they do.

Almost any software that runs on the internet or connects to the internet in some way uses domain names, so it’s important that if you buy a domain name with a new TLD that you can use it in any of these places.

This is technically true if you’re talking about truly universal acceptance of all new gTLDs … BUT … when people say this what they mean is that your browser, email client, website, app, whatever, won’t read your domain name or your email address correctly unless it uses one of the “original” gTLDs (that is, .com, .org, .net, etc.).

And what’s technically true about this is that there’s a few thousand miles of difference between “no applications (or most don’t) accept any new gTLDs” and “all applications accept all new gTLDs.”

True, when the new gTLDs first rolled out there were issues with web browsers that would do a Google search instead of a DNS lookup if you typed a domain that didn’t end in .com, .net, etc., or website forms where entering an email address where the domain had more than 3 characters caused an error.

Those issues were the “easy” problems.

The challenge now is getting software that is often designed and marketed primarily in English-speaking countries to accept domains in scripts that don’t go left to right or have other kinds of special characters.

To be specific, as of September 2020, Chrome, Opera, Safari, and Edge fell short in recognizing left-to-right scripts while Firefox and Safari failed to recognize the Japanese “open dot” character as a dot in a domain name. But all of these browsers and Internet Explorer (which doesn’t have these problems), can recognize any other new TLD.

And to be clear, the number of new gTLDs covered by this is only a small handful and amount to less than 1% of new gTLDs.

As for email, again the obstacle now is in gaining compliance for non-ASCII characters to be recognized by the various software involved in sending and receiving email.

3. New gTLDs are full of spammers: TRUE AND FALSE

Another thing you’ll hear a lot is that domains in new gTLDs are only registered by spammers.

We’re not going to sugarcoat it: a lot of new gTLDs—especially inexpensive ones—do get used for spam.

But it would be unfair to let this impact your impression of all new gTLDs. According to reporting from ICANN’s DAAR for the year 2019:

of the 299,211 domains identified as security threats reported in 376 new gTLDs:

And in a 2016 study, around a third of all new gTLDs were 100% free of any abuse in the last quarter of that year.

So while looking big picture, statistics that point to new gTLDs accounting for 15.3% of domain registrations and 40.4% of spam domains, this obscures the fact that spam domains are concentrated in a relatively small number of gTLDs overall.

If you’re concerned about the reputation of a TLD, Spamhaus keeps track of the “most abused TLDs”, and you can check the incidence of spam by searching by TLD.

As for why incidences of abuse take place on these TLDs, as one report notes:

The registry operators of the most abused new gTLDs compete on price. We found that their retail registration prices were occasionally below US $1 or even US $0.50, which was lower than the registration fee for .com domains. It is not clear, however, if pricing is the only factor driving high concentrations of maliciously registered domains.

4. New gTLDs are just a scam to make money: FALSE

This one considers the new gTLD program as a whole to be a bad-faith attempt on the part of registrars acting through ICANN to create a market based on domain name speculation and preventing cybersquatting.

For its part, ICANN is a non-profit organization, so this theory is not about ICANN directly benefiting from the new gTLD program, but registrars influencing ICANN to implement the new gTLDs in order to make money themselves.

The argument rests on the idea that the majority of new gTLD registrations are “defensive registrations,” or trademarks that have been registered in a particular TLD with no intent to actually use the domain, only to prevent someone else from registering the domain name.

It’s not wrong to say that the emergence of new gTLDs has led to more domain name speculation (buying a domain name in order to resell it) and defensive registrations.

The new gTLDs also have a couple of mechanisms to combat cybersquatting and restrict domain speculation.

TMCH can also help resolve in favor of trademark holders in the case of disputes.

Essentially, registries define a list of generic terms that they expect to be in high demand and set the pricing on these domains much higher to help ensure the domain, if registered, will be used for a website.

Reserved domains are another list of domains a registry has decided not to put up for sale (although they sometimes release these later), for whatever reason.

Some registries have started to offer “blocking products” that let you block registration of your trademark without having to purchase individual domain names.

You could, though, just as easily argue that all of these mitigation strategies are yet another way to profit off of creating a problem for companies that didn’t exist before new gTLDs were created.

But there are also new gTLDs with a high proportion of domains used for websites. A 2017 study found that out of 64,000 active .guru registrations, for example, 56,000 of them were running actual websites. That’s more than 87%. So even if you accept this logic, you have to also accept that the new gTLD program is also meeting real demand, even if that creates inconveniences for others.

Sure, there’s nothing inherently valuable about one TLD over another. But there are also some benefits that new gTLDs have over .com.

One thing that some new gTLDs have over .com is that they are not as generic. Thanks to new gTLDs, it’s now possible to say more about your domain in your domain and still keep the name itself relatively simple.

You might want to say something about your specialization or area of expertise, the industry you’re in, or your personal identity. Or you might speak a language other than English and want a TLD in another language to better reach an audience that doesn’t speak English.

When new gTLDs were released, most people didn’t notice. Some people got worried. And other people were just cautious. All of those are natural responses.

The point of new gTLDs is to offer more choices, to open up the possibilities for people daring enough to dither from .com to have the perfect generic domain that’s not available in .com. The program is achieving that goal.

That’s not to say that it hasn’t been a pain by some or aroused a fair share of skepticism. That’s natural. But some of that skepticism has led to painting all new gTLDs with the same brush. As before the new gTLD program, there are bad actors and bad-faith actors, but they don’t represent everyone.

Ultimately, our advice is to be TLD-agnostic when choosing your domain name. By that we mean, if a TLD makes sense for you, register a domain with that TLD.

If you’re considering a new domain name, consider the TLD as well, when you’re assessing whether it’s a good domain for you.